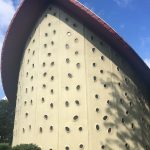 The Naples area was initially settled by the Seneca Nation with the first white settlers coming in 1789. Initially called Watkinstown, the name was changed in 1794 to Middletown, because it was halfway between Canandaigua and Bath by stage coach. In 1808, the name was again changed to Naples because a European visitor said the area reminded him of Naples. Italy.

In 1876, twenty-four German families petitioned Bishop McQuaid to establish a Catholic parish in Naples. Incorporated in 1876, the parish initially worshipped on the second and third floors of the Naples Memorial Town Hall until the church was constructed in 1878

In 2001, St. Januarius’ celebrated its 125th Anniversary. For the occasion a program was printed that included the history of the parish. We offer that program for your reading here:

The 125th Anniversary Celebration of the Dedication of St. Januarius’ Parish

The name chosen for the new parish was St. Januarius, a bishop of an area outside Naples, Italy who died for his Christian faith about 305 A.D. Although initially buried in a field, his body was moved several times and since 1480 rests in the Naples Cathedral. With his bones are two vials of a red congealed substance believed to be the blood of Januarius. The first mention of this blood dates from 1389. Popular legend says that a woman collected the blood immediately after his death. On several days throughout the  year, typically around  the feast day of St. Januarius on September 19,  his blood  liquefies. A nun who used to be at this parish, Sister Mary Frederica Konz, made a pilgrimage to Naples and witnessed this liquefaction.  Neapolitans seek the intercession of St. Januarius in time of impending calamities such as war, famine, plague, and volcanic eruptions.

When the diocese began to experience a shortage of priests, St. Januarius was paired with St. Patrick’s in Prattsburgh in 1994 and subsequently became part of Our Lady of the Lakes Catholic Community in 1998.

In 2011 the sanctuary area was renovated that:

The project was originally estimated at $300,000. The renovation was split into two phases. Phase I is the work described above. Phase II is expected to include replacing the slide partition between the church and the hall and the construction of a new baptismal font. There is no date scheduled for Phase II.

For a Detailed History of Saint Januarius and Our Lady of the Grape: St. Januarius History